On October 5, 1970, PBS aired a new television show that would end up introducing millions of people to yoga. The show was Lilias, Yoga, & You, an instructional program hosted by Lilias Folan, a Cincinnati, Ohio based yoga enthusiast, who helped demystify the practice of yoga for people all over the United States.

Known as the “First Lady of Yoga,” Lilias’s influence is undeniable and everlasting, with one person on YouTube recently commenting, “Wow … I’m approaching 70 years young and did yoga originally with Lilias on PBS many a decade ago. This vid is just what i need to renew my commitment to yoga at this tender age that i have reached. My body/mind seems to have a memory of her leading me in asanas.”

Her show began on WCET, Cincinnati’s local PBS station, where Lilias’s sunny, easy going demeanor paired with the soft focus of the public television aesthetic of the 70s found an unexpectedly enthusiastic audience. In hindsight, we may feel captivated by the nostalgic, analogue warmth of the set design, but it’s clear that Lilias’s charm is what enticed millions of people to watch her show for nearly 30 years.

“KEEP IT FLEXIBLE, INCREASE YOUR ENERGY LEVEL, AND LEARN HOW TO RELAX.”

Her charm is, perhaps, best described by Gerald Nachman, a writer for the San Francisco Chronicle, who in 1974 wrote, “My yoga lady remains a mystery woman, a comely creature from a distant planet. Lilias is demure and quite serious. By far her most intriguing aspect is that she never sweats.”

A life long exercise enthusiast, Lilias’s ethos may be best summed up in a quote from the first lady of yoga herself: “Keep it flexible, increase your energy level, and learn how to relax.”

Want to learn more about the woman Time Magazine called “the Julia Child of Yoga”? Lilias still hosts yoga classes on the regular. You can sign up to do yoga with Lilias on her website. Lilias has also recorded guided meditations with ambient musician Steven Halpern, and has authored numerous books on the practice of yoga. Learn more here. 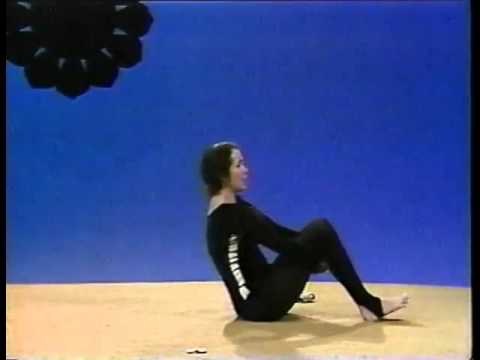